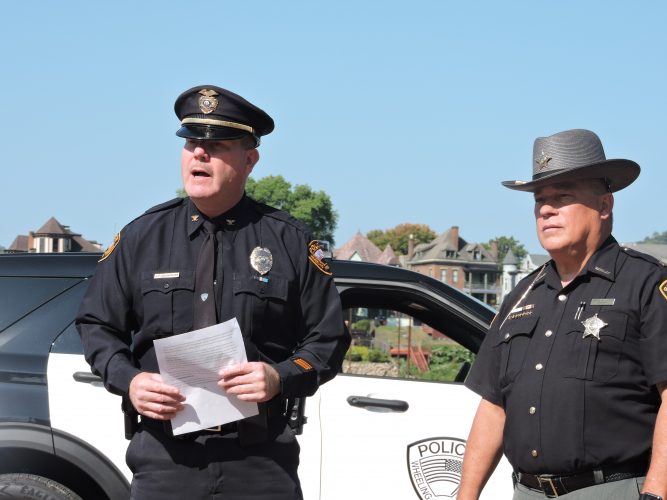 WHEELING — Police are hoping that a newly established crime reporting line will tip the scales in combating unlawful activity on both sides of the Ohio River.

At a press conference Wednesday, Wheeling Police Chief Shawn Schwertfeger and Belmont County Sheriff David Lucas announced the establishment of a tip line for people to volunteer information on crimes throughout the upper Ohio Valley, with a financial reward for their trouble. Schwertfeger hopes that the Crime Stoppers program will incentivize people to assist with police work where they would otherwise stay quiet.

“Citizens are always asking us, ‘what can we do to help?’ The answer I have is to talk to us,” he said. “Oftentimes that’s frowned upon within the community, or they just don’t want to get involved. This is an effort to reward, monetarily, those folks who decide to do the right thing and pick up the phone and report information on serious crimes.”

“I understand people may not want to get involved,” Lucas later added. “This tip line, it gives people an avenue to call in the tip and give it. One tip could break open a case, and especially if it was a violent crime, with that tip, we could take a violent criminal off the street. … Give us a call, and I promise you, between Chief Shawn and myself, it will be taken seriously, and it will be followed up.”

The tip line will lead to phones answered by detectives with local law enforcement, and the information provided will be checked and passed along to the relevant local authorities, Schwertfeger said.

Cash rewards for tips will be distributed upon successful conviction as a result of the tips. The funds for the program are raised through a nonprofit organization, which was not identified Wednesday for privacy reasons, and do not come from the law enforcement agencies. Schwertfeger said he foresaw the department participating in fundraising efforts in the near future. He also said people were welcome to provide funds used to reimburse those who provide tips.

“If you have information, starting this evening, on a wanted figurative or a crime that has occurred, anywhere in the upper Ohio Valley, we’ll take it, vet it and report it to the appropriate agency,” he added.

Lucas said he was happy to partner with Schwertfeger and the Wheeling Police Department for the program, as he said criminals frequently treat the Ohio River as a buffer between the two jurisdictions.

“Ever since I was a deputy, the local criminals use the riverfront as a barrier; our people will come over here to do crimes, and people from West Virginia will come over. This right here will assist us to tear down that wall,” Lucas said. “We’re not looking at a state line anymore. It’s the working relationship that Chief Shawn has brought to our area, and we have jumped on board with.

“I take our community as our ears and voice. They’re our people. … I’m excited about this program. I can’t wait til it gets up and going. It’s all about taking the criminal off the street and putting them in jail where they belong.”

The tip line may exclusively be reached at 833-484-7546. Tips will not be accepted through social media, websites or email in order to ensure confidentiality. The Crime Stoppers of the Upper Ohio Valley website is crimestoppersuov.com.

Today’s breaking news and more in your inbox