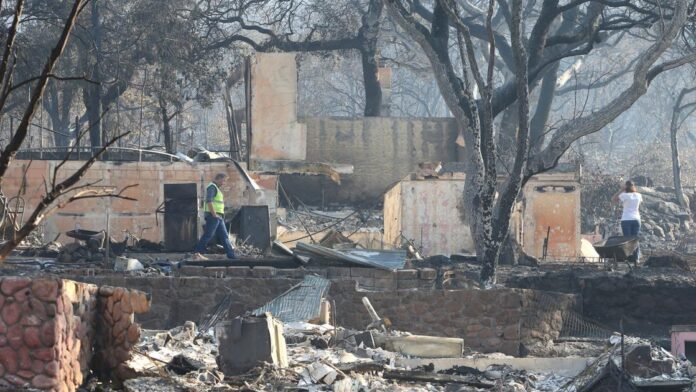 “Why is that gone?” he asked, turning his head one way. Turning in the other direction, he asked: “Why is that there?”

Jumping into action when the Glass Fire began as an angry orange glow against a black Upvalley sky, Leonardini had shared some of the earliest images of an inferno fanned by wind gusts across a landscape parched by several years of drought in the 2010s. If the size of the fire did not quite surprise him, the speed and direction of its spread did.

“I saw the big black columns of smoke, and the homes going up. It was rough – you don’t expect it to get this large,” he said, piloting his pickup down a two-lane road made narrower in places by fallen trees. “The fire went into the wind to Summit Lake – I’m thinking, ‘How can it do that?’”

“I worked 24 hours straight, slept two hours – even slept through the hi-lo sirens – and then I did it again. I didn’t want to be the bearer of bad news, but my sister told me these people want to know, so get on video, get onto Facebook Live. I know the roads, I know the area, I know a fire’s behavior. I can help calm people down.”

On Oak Street and Pine Place, the ferocity of the Glass Fire remained much in evidence days after the flames had roared through. House after house was an acrid and powdery ruin, the ground still smoldering on some lots. Inside the burned-out shells that had been cars and pickups, globules of glass wrapped around steering columns, all that was left of now-molten windshields.