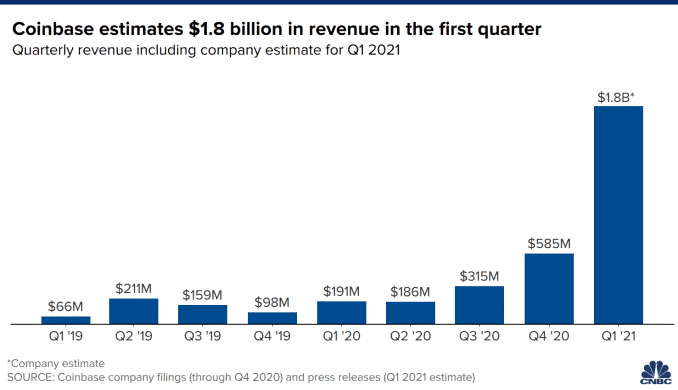 Coinbase, the largest U.S. cryptocurrency exchange, said on Tuesday that its revenue in the first quarter was about nine times higher than last year, driven by the historic rise in the price of bitcoin.

The following is the bar chart of revenue of Coinbase

Revenue jumped to about $1.8 billion in the first quarter from $190.6 million in the same period last year, coinbase said in a press release, adding that the results were preliminary and unaudited. Net income increased from $31.9 million a year ago to between $730 million and $800 million.

The above is Bitcoin and ethereum in the past year

The company also said the platform had verified 56 million users in the first quarter.

In the first quarter, coinbase said it had 6.1 million MTUs a month. Coinbase predicts that under the most aggressive forecasts, the rise in the market value of cryptocurrency may push MTU to 7 million. In the medium range, assuming the encryption market is flat, MTU will reach 5.5 million. The most conservative forecast is 4 million.

Recent private market transactions valued coinbase at about US $68 billion, nearly 12 times higher than the US $5.3 billion valuation in the third quarter of last year, highlighting that its valuation soared with the soaring price of bitcoin. If we consider the number of fully diluted shares, the figure will increase to about $100 billion.

What makes coinbase unique is that its valuation growth reflects the development trajectory of major cryptocurrencies. Bitcoin has risen about 700% in the past year, while Ethereum has soared more than 1100%.

Coinbase said on Thursday that it expects its class a common shares to be traded on the NASDAQ Global Select market from April 14, and its statement on form S-1 filed with the securities and Exchange Commission took effect on April 1.

Last month, coinbase registered 1149 million class a common shares for trading when the shares are listed under the stock code coin.

Secret Service stepping up in fight against cyber-enabled financial crimes

How To Prepare Your Finances For A Hurricane

Annapolis will spend $75,000 of federal coronavirus money for 12 months of free internet...