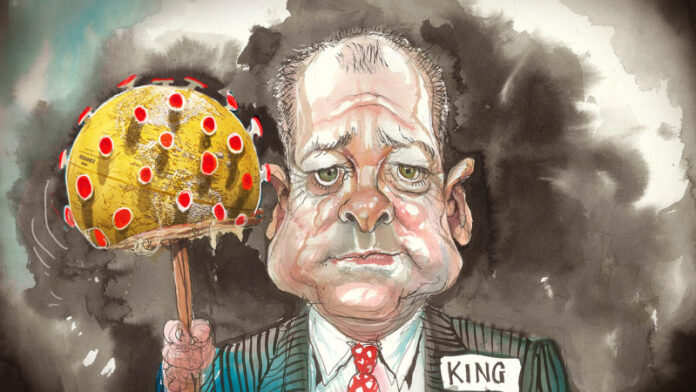 It’s also measured in the omission of the interim dividend to shareholders and the worst share price performance of any of the big four banks – a poor lot anyway – over the past year.

That period neatly encompasses AUSTRAC’s filing of charges alleging millions of breaches by Westpac of anti-money laundering laws, Westpac’s initial efforts to ride the scandal out with its top management intact and subsequent capitulation with the departures of chief executive Brian Hartzer and chairman Lindsay Maxsted, and the harrowing negotiations leading up to Thursday’s agreed settlement.

After the announcement of the settlement and the opening of trade on Thursday, Westpac’s shares have fared worst of the big four banks over the year, falling 46 per cent.

NAB – which has its own unresolved anti-money laundering investigation being undertaken by AUSTRAC – runs them a close second, falling 44 per cent, and ANZ has fallen 42 per cent.

Commonwealth Bank, which settled its anti-money laundering investigation with AUSTRAC in 2018 by paying a $702 million penalty, has shown them all a clean pair of heels, dropping just 23 per cent.

So the abject tone of chief executive Peter King’s apology is appropriate. But the test of Westpac’s resolve will be in the successful execution of its rehabilitation program.

That all sounds appropriate too. But the 200 financial crimes experts won’t make a difference if they are not empowered to raise their concerns to top management and if necessary board level swiftly and without fear of being rebuked or rebuffed or deflected.

That’s the task for King and chairman John MacFarlane, and indeed for the directors and management of any financial services company conducting cross-border financial transactions.

Because they’re all at risk of stumbling, as CBA, Westpac and NAB are painfully aware, and it is inevitable that other financial services companies will get caught in AUSTRAC chief Nicole Rose’s web.