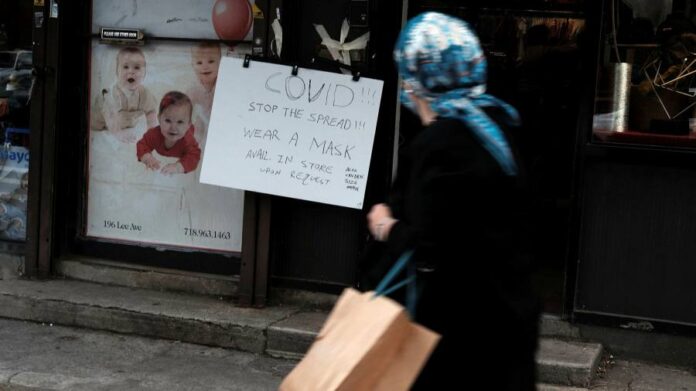 New York City mayor Bill de Blasio on Sunday proposed reinstating the lockdown for nine neighbourhoods in Brooklyn and Queens in which there had been a surge in coronavirus infection rates.

The proposed partial reversal in New York came as the number of cases in the US continued to rise. The number of new positive daily tests has jumped from 36,947 on September 29 to 51,203 on October 3, according to the Covid Tracking Project. The country had reported 201,351 coronavirus deaths as of Saturday.

The plan for New York, which still needs approval from governor Andrew Cuomo, would require schools and non-essential businesses to close in the affected areas beginning on Wednesday.

New York City, which has recorded more coronavirus cases than any other US city, had been easing its restrictions as its infection rates improved. But with positive test rates soaring in some areas, Mr de Blasio said there was no choice but to “rewind”.

“Today is not a day for celebration. Today is a more difficult day,” he said. “We are having an extraordinary problem. Something we haven’t seen since the spring.”

The affected neighbourhoods are being shut down after more than 3 per cent of coronavirus tests in the areas came back positive for seven consecutive days.

This reversal came just days after the city reopened its public schools. Mr de Blasio estimated that the schools targeted to be shut down would remain closed for two to four weeks.

There are approximately 100 public schools and about 200 non-public schools, including yeshivas, expected to be closed, which leaves 1,500 others across New York which would not be affected.

Many of the neighbourhoods being shut down have large Orthodox Jewish communities, which the New York Times has reported have suffered soaring rates of infection in recent weeks.

For non-essential businesses in these areas, the city will implement the same “phased” reopening plan it used earlier this year.

Mr de Blasio said the city government was keeping a close watch on other areas with increasing infection rates, including parts of Williamsburg, Brooklyn, that could be added to the lockdown.

These areas were not subject to the same restrictions as the other nine at this time, he said, but restaurants would be forced to cease indoor dining. Gyms and pools would also be closed.

For each day from September 29 until October 3, New York state recorded more than 1,000 new cases of coronavirus. It had not previously seen multiple consecutive days with more than 1,000 positive tests since June.

Governor Cuomo has not yet said whether he would support Mr de Blasio’s plan. But he announced separately on Sunday that the state would begin an “aggressive enforcement” campaign to deploy personnel in hotspots to improve compliance with coronavirus prevention rules.

Citicorp: The advent of vaccines may cause the dollar dropped by 20% next year

Everyday Cheapskate: Library services that save you money